ANNUAL MEETING OF THE COUNCIL 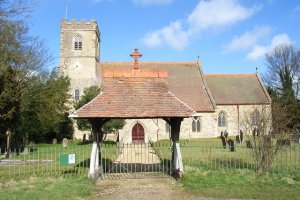 St Mary's church is sited on a prominent hill crest in the north west part of the parish. The style of architecture indicates the church and lower part of the tower were built around the year 1200. However, the earliest known documented reference is in the Register of Henry Burgherst, Bishop of Lincoln, compiled in 1322 and archaeological evidence suggests the churchyard occupies the site of a much earlier Iron Age hill fort.

The church is constructed of coursed, squared, limestone and ironstone with plain tile roofs. The church comprises a chancel, vestry and organ chamber, nave, north and south aisles, south porch and west tower. Various date stones exist including "1638" to a north-west window, "1775" to the right of the north-east 4-arch mullion window in the north aisle and "1870" to the west rose window. "Thomas Cooke, 1808" is inscribed on a clockface on the south face of the tower. A new mechanism and hands were fitted more recently.

The floor of the south porch is of slate, laid edgewise in square blocks in alternating directions. This is much older than the church floor which was neatly re-paved in 1815. 19th century marble wall monuments include a large memorial by the Chantrey to Charlotte Bradshaw who died in 1820.

Lord Southampton arranged for repairs to be made in 1832 and in 1850 he built the vestry with the font being provided by subscriptions in 1853. Further work was carried out in the 1870s by J P St Aubyn at the expense of Sir Robert Loder of Whittlebury Lodge. Sir Robert spent £7000 on various restorations and the installation of an organ. In 1887 the tower was raised.

Whittlebury's parish chest, in which wills and other important documents were once placed, is typical of medieval design with its fine ironwork and double locks. It may also date back to around 1200. The church's chalice (1570) and communion plate (1685) were stolen some years ago and have been replaced by modern items.

In terms of documents, the local tailor William Parish was elected to open a Register of Baptisms, Marriages and Burials in the Parish of Whittlebury and Silverstone in 1653, the year in which Oliver Cromwell became Lord Protector.

These records are almost complete from 1655 although the early entries are difficult to decipher. There were no printed columns or headings to separate the details or, indeed, indicate what particulars should be entered into the register. Separate registers were first kept at Silverstone from 1831.

The list of rectors for Whittlebury records the first known incumbent in 1232. Until 1553 all appointments to the benefice were made by local knights. From 1584 onwards, Whittlebury's rectors were appointed by the Crown.

Having been Rector of St Mary's since 1636, Robert Skinner, Bishop of Bristol and then Oxford, was impeached in 1645 and committed to the Tower of London but subsequently released. At the Restoration in 1660, Skinner was reinstated as rector of Whittlebury by Charles II, but subsequently resigned.

The longest serving rector is recorded as John Yate, Curate of Whittlebury and Silverstone. Yate completed 55 years' service from 1711 to 1766. The Reverend Henry Beauclerk opposed the establishment of the Wesleyan chapel in the 1770s.

The church owns an interesting medieval chest which may be 800 years old and has been removed for safe keeping. It is made of oak and bound with iron bands and three double locks. The rector and the churchwardens used to hold one key each so that no one individual could open the chest without the other two being present. The chest contained a book compiled by Henry Wake of Sholebroke in 1854 giving handwritten accounts of church and associated parish matters.

The Reverend John Yate who became Whittlebury's curate on the 4th October 1711 is mentioned. The Reverend Yate was buried at Whittlebury on 1st October 1766 having completed 55 years' service at St Mary's. Another entry from the 18th century records the shooting in 1788 of George Linnel, aged 34, while collecting taxes. His murderer was hanged at Northampton.

Reference is made to Joseph Smith of Sholebroke Lodge in Whittlebury Forest. He was Master of the Hounds to the Duke of Grafton for over 50 years. John Smith 'participated in the pleasure of the chase till within a short time of his death' when he was 88.

The document also contains a list of inscriptions in the church as well as those found on some of the older gravestones in the graveyard.

The fourth bell is probably much older than these and is inscribed with a fleur-de-lys and what appears to be the alphabet from A to 0 with certain letters upside down.

The earliest entry in the bellringers' subscription book is dated 1896 when the subscribers were the Rev. C P Blundell, Captain Ringrose, Lord Alfred Fitzroy, the Hon. D Permans and A G Saunders. Other regular subscribers over the following years included Lady Ipswich and Col. F Douglas-Pennant. It was probably through their subscriptions that £100 was paid on 3rd May 1898 to John Warner and Son for "two treble bells for Whittlebury Church".